The Solidoodle 3 3D printer will be on display at 3DEA!

3DEA is proud to announce that our newest addition to the 3DEA family will be New York-based 3D printing brand, Solidoodle! Created by aerospace engineer Sam Cervantes in 2012, the former Makerbot executive combined his tech knowledge and experience as a business professional at Fortune 500 companies, and he set out to create an easy-to-use 3D printer that combined accessibility and affordability.

In an effort to bring manufacturing independence to inventors, makers and engineers around the globe, the inexpensive and rugged Solidoodle 3D printer was born in 2012. With $2 million in sales, Solidoodle not only boasted a record-breaking first year, but they had also produced the first $500 3D printer on the market! The successful printer also garnered praise from respected media outlets such as USA Today, ABC, Tech Journal & Wired.

“The reigning champion of affordable 3D printing has been MakerBot Industries, but Solidoodle, run by former MakerBot executive Sam Cervantes, now solidly holds that title with the release of a new $499 model,” says Kimber Streams of ABC News. 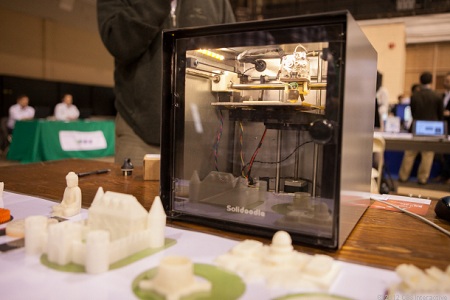 As Cervantes and Solidoodle continue to ride the wave of its three expert levels of their Solidoodle 2 3D printer models, the 2012 CNET Winner of Best of NY Tech Day is prepared to supply the 3D printing industry with another groundbreaking 3D printer when it introduces the Solidoodle 3 in early 2013.

Priced at $799, the larger Solidoodle 3 has doubled its build volume from its predecessor, giving you the ability to generate prototypes and prints at 8” X 8” X 8”—while sustaining the user-friendliness and quality that the Solidoodle brand has built its reputation on.

Starting Saturday, January 19th, you will have the opportunity to witness both the Solidoodle 2 & Solidoodle 3 at the 3DEA store. For more info about Solidoodle, please visit their the Solidoodle website, Facebook and follow them on Twitter.